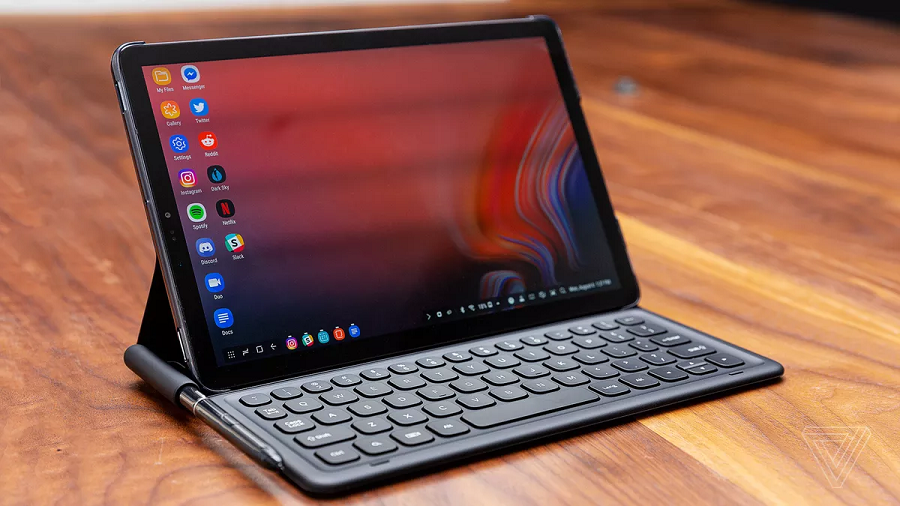 Hi guys Nick here
and I’m the proud founder of smartgearnow.com and the CEO of REV PRODUCTION. Today I will be doing a honest review on the new Samsung galaxy Tab S4 which was released in August of 2018. This product is being sold on amazon and I’m going to be reviewing the , software and accessories, Design, battery life and specs, Verdict.

The Samsung Galaxy Tab S4 tries to push Android tablets to the next level with 2-in-1 desktop-like software, and while it’s what we want to see from even the iPad, the idea doesn’t automatically make it the best tablet. It’s overpriced, the touchscreen isn’t as responsive in Dex mode, and too many apps aren’t optimized. The Samsung Galaxy S4 is the best android tablet you can buy today. With its 2-1 features that tablet and laptop-like mobility.

The Samsung Tab S4 competes with the Ipad Pro 10.5, They both have 10.5 inch display with 64GB of storage and 4GB of Ram. But Only, Samsung includes the S Pen for a better value (Apple Pencil is separate and expensive) and it allows for expandable microSD storage. So far, so good, Samsung.

The other selling point here is the built-in Dex software, which mimics a desktop interface and has second-screen capabilities. The Dex mode transforms the table into a working laptop with an icon aligned to fit the left side of the screen. The Dex mode is The Samsung Tab S4 best and worst feature, The Tab S4 can simply switch to DeX mode on demand, which gives the tablet a real laptop feeling when used with the optional keyboard. DeX is particularly useful for multitasking as it functions like that of a desktop OS rather than the split-screen mode that Android and iOS currently support.

Unfortunately, DeX does not work with multiple user accounts, while the S Pen is only of limited use. We could take notes with the pen and use it for inputs, but the physical shortcut menu button does not work in DeX mode.

You can buy the Samsung Galaxy Tab S4 in the US, UK and Australia with the Wi-Fi edition being available from a variety of retailers and the LTE edition on sale from carriers and networks.

In the US you can buy the LTE version from Verizon now with Sprint and US Cellular selling the Tab S4 in the third-quarter of this year. Apple did a new size, so Samsung did too. Just like Apple set the price and Samsung followed, down to the penny.

This is actually a bigger change for Tab users because the jump from a 9.7-inch to a 10.5-inch screen means Samsung eliminated the physical home and capacitive buttons on front, as one does these days in an increasingly edge-to-edge screen world.

The on-screen buttons work great, just like they do on the Galaxy S9 and S9 Plus, and the HDR display is punchy and bright.

The iris scanner that replaces the fingerprint sensor works fine if you’re in front of the tablet at a good angle.

We had trouble unlocking it to read on the couch and in bed, but you’re not opening up the tablet multiple times a day at all sorts of angles like you would on a phone. There’s a lot more forgiveness for Face Unlock here.

You’ll experience problems using the Tab S4 software and keyboard, but you’ll have plenty of time to work through them because the battery life is stellar. So fast charging is confirmed and you’ll have a full all-day battery in 3 hours and 16 minutes from a fully depleted Tab S4. No surprise, that’s faster than iPad charge times, and Samsung includes the fast charging equipment in the box.