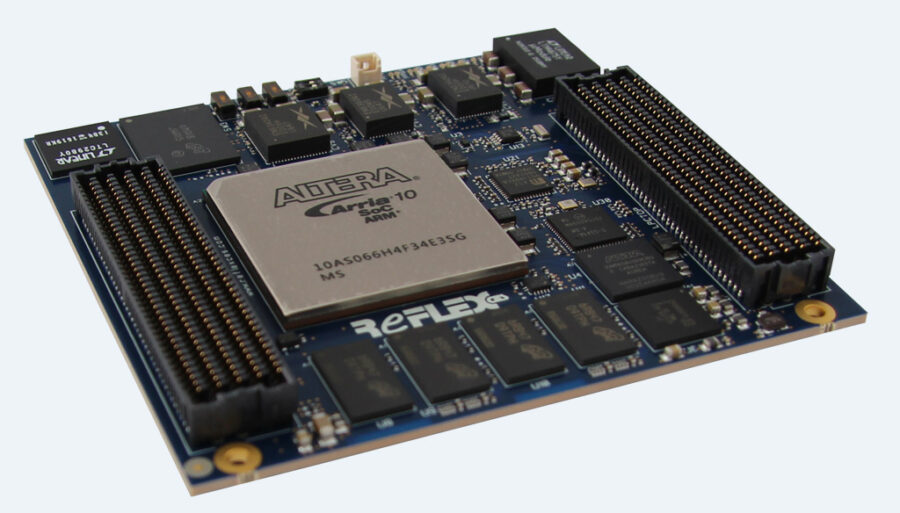 The acronym for FPGA stands for ‘field programmable gate array’. There are programmable devices in the market, such as PAL, GAL, and CPLD. With the FPGA module, you can further enhance the capability of programmable devices by reprogramming them according to your project. It emerged as a semi-custom circuit in the field of application-specific integrated circuits, which not only solves the deficiencies of custom circuits but also overcomes the deficiency of the gate circuits.

Analysis of smart network card based on Arria 10 FPGA

The advantages of using Arria 10 SOM FPGA smart network card for network acceleration are as follows. Free up valuable CPU cores, and offload the data processing originally implemented in the CPU to the FPGA for accelerated implementation. In this way, the CPU can be used for other tasks, and the effective use of resources is further realized based on virtualization.

FPGA has the characteristics of low power consumption, flexible and programmable. At the same time, FPGA can be programmed at any time, so the acceleration of multiple network functions can be completed with a set of hardware devices, without the need to replace acceleration cards or other hardware devices. FPGA can perform high-speed parallel data packet processing and is widely used in the field of network communication, with rich and mature solutions. Even the functions defined by the user can be implemented without the need for proprietary equipment. This balances the contradiction between high performance and high versatility.

The main difference between FPGA and CPLD

As early as the mid-1980, FPGA chips have taken root in Programmable logic devices. CPLD and FPGA include some relatively large numbers of editable logic units. CPLD logic density is up to 10,000 logic units. On the other hand, FPGA chips have up to several million. The system structure is also an important aspect between them. CPLD structure results lack of editing flexibility. On the other hand, FPGA is flexible and time-saving. Thanks to the several connection units in FPGA, you can edit the program easily. FPGA structure is much more complicated.

Another difference between CPLD and FPGA is that most FPGA chips contain high-level built-in modules and built-in memory. Therefore, a related important difference is that many new FPGA chips support full or partial in-system reconfiguration, allowing system upgrades or dynamic reconfiguration. Some FPGA chips allow part of the device to be re-edited while other parts continue to operate normally.

After the CPLD is powered off, the original burned-in logic structure will not disappear. When the FPGA is powered off and powered on again, the logic code in the FLASH needs to be reloaded.

If you compare FPGA with the traditional gate arrays and logic circuits, the structure of FPGA is different. FPGA includes tiny lookup tables. Each lookup table connects to a D flip-flop. These modules are connected to each other or connected by metal wires. Another aspect is the ability to reconfigure the FPGA, allowing adaptation to a changing environment by choosing the best-fitting controller algorithm, while reducing required logic resources and the implementation time. FPGA allows unlimited programming.

How Smaller Companies Can Rely on Market Intelligence to Analyze Customers