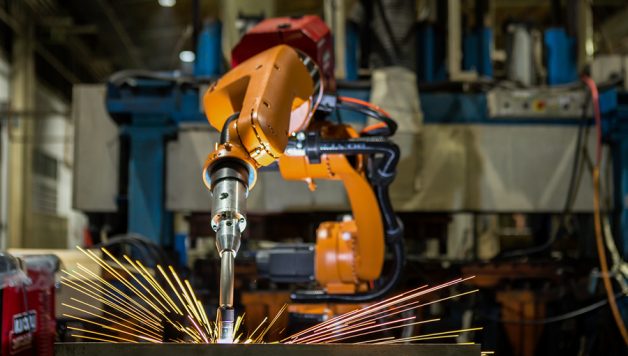 Robotic welding is the process in which mechanized programmable tools are used to perform a welding job fully as well as handling the specific part that is being welded instead of using traditional methods. However, this is not to be confused with welding processes such as gas metal or using Arc rite welding machines, which, technically speaking, is not considered to be completely robotic since the materials that are to be welded are prepared by a human being rather than a machine. Robotic welding is primarily used in two different instances:

The process of robotic welding is relatively new regarding the actual robotics industry itself despite robots originally being introduced in the 1960s. The robotic welding process didn’t begin until the 1980s, which is the same time that the automotive industry began utilizing robots solely for spot welding. Ever since that process began, not only has the overall number of robots used in this particular industry grown but so has the number of processes in which robots are used for. In fact, more than 120,000 robots were used in the automotive industry in North America alone. Half of that amount was used specifically for welding purposes.

Recently released reports state that it is expected that a revenue increase of 40{4df784c43bbd73ac7e20021a4775f528dea44aee084e253cde0d77ec4e2dcf5f} will occur in the robotic welding market thanks to new and developing countries now becoming aware of the many benefits and qualities that this process can produce.

In 2014 alone, the robotic welding industry reported revenue earnings of approximately $2.44 billion and is expected to climb by the year 2020 to approximately $3.38 billion, according to reports from Frost & Sullivan. This is all thanks to both the long-term benefits and technological advances of robotic welding. Furthermore, Frost & Sullivan also report that the region which will see the largest growth in the robotic welding industry will be the Asia Pacific region. Also, similar activity is expected in areas such as Latin America, Africa, the Middle East, and Russia.

These reports further state that greater repeatability and consistency, as well as a significant improvement in energy efficiency, will be offered when it comes to using robots for welding purposes. Demand for robotic welding is expected to rise primarily in the transportation and automotive industries. Other industries such as heavy machinery, construction, and electronics are also expected to see growth in demand as well. Furthermore, the reports further state that developments in carbon fiber and composite materials will help to broaden the overall scope regarding manufacturing automation.